Participation is a ‘buzz word’ in international development, a term that embraces a wide range of possible meanings. Many different actors in development adopt the language of participation, but with different and sometimes contradictory motivations and objectives. Here we look at different meanings of participation and discuss two important typologies that highlight the different ways the word has been used and the outcomes that have resulted.

The many meanings of participation

As one of the key words in development, participation is used by actors from very different political backgrounds. Lack of conceptual clarity poses real risks. Representatives from opposite ends of the political spectrum use the language of participation but mean different things. Some speak of transforming power structures in society that oppress the poor, while others talk of the economic participation needed to advance a neoliberal agenda. In local politics, ‘participation’ can mask manipulation, or the legitimation of interventions driven by more powerful actors in which citizens have no control.

Clarity and specificity are therefore necessary in any policy discussion or intervention claiming to make use of participatory approaches. It helps to understand what citizens actually do, or what is done to them, when they are encouraged to participate. It also helps to understand participation as something deeply political, and to retain the notion of rights and empowerment.

The ladder of citizen participation

The ladder is a useful tool for interpreting what is meant when programmes and policies refer to ‘participation’. Arnstein uses the terms ‘the powerful’ and ‘citizens’ as shorthand, but emphasises that neither are homogenous entities; and that each grouping contains actors with more or less power. 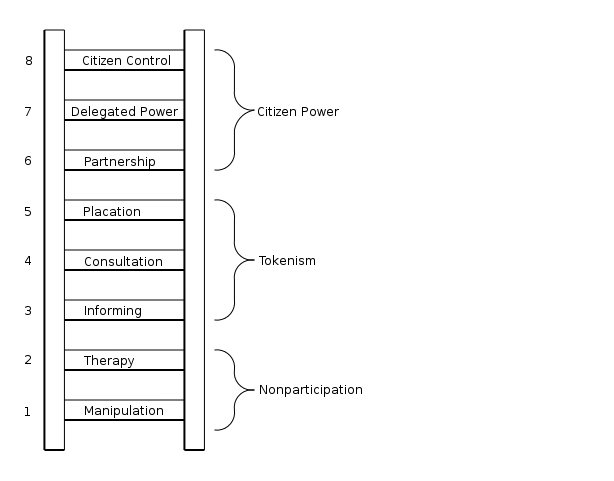 What the ladder does not show are the actions and barriers to move from one level to the next. Finally, in real-life situations many more levels may exist, and people may move up and down the ladder over time within the same intervention.

The forms and functions of participation

Sarah White distinguishes four forms of participation: nominal, instrumental, representative and transformative. She reasons that each form has different functions, and argues actors ‘at the top’ (more powerful) and ‘at the grass roots’ (less powerful) have different perceptions of and interests in each form.

White’s work helps us to think about hidden agendas and the dynamic relationships between more and less powerful actors. Discussing the differences or compatibilities between bottom-up and top-down interests can lead to a clearer understanding of the politics of participation. The actors at the top may talk about participation, but intend to maintain the status quo. It is only in ‘transformative participation’ that the power holders are in solidarity with the less powerful to take actions and shape decisions.

White emphasises that this framework needs to be seen as something dynamic, and that a single intervention can include more than one form of participation.

Tell us about your experience of using this method

Depoliticising development : the uses and abuses of participation