Spatial information technologies, including Geographic Information Systems (GIS), Global Positioning Systems (GPS), remote sensing software and open access to spatial data and imagery, empower those who command them. Differential access can lead to gains to powerful people and interests to the disadvantage of communities and local people, further marginalizing those already marginalized. PGIS is a generic term for approaches which seek to reverse this.

By combining PRA/PLA and spatial information technologies, minority groups have been empowered along with those traditionally excluded from spatial decision-making processes.  Giacomo Rambaldi’s publication ‘Participatory 3-dimensional Modelling (P3DM)’ details how local people have been trained to use the technologies to construct their own maps and 3-D models and use these for their own research. These maps and models differ from the ground and paper maps of PRA in their greater spatial accuracy, permanence, authority and credibility with officialdom.  As Rambaldi points out in Barefoot Mapmakers and Participatory GIS, they have been used as ‘interactive vehicles for spatial learning, information exchange, support in decision making, resource use planning and advocacy actions’.

How can PGIS be useful? 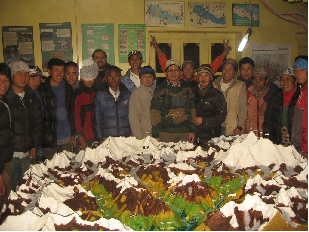 Villagers and their 3-D model in Monzo, Nepal

Applications have been many. They have included protecting ancestral lands and resource rights; management and resolution of conflicts over natural resources; collaborative resource use planning and management; intangible cultural heritage preservation and identity building among indigenous peoples and rural communities; equity promotion with reference to ethnicity, culture, gender, and environmental justice; hazard mitigation, for example through community safety audits; and peri-urban planning and research and climate change adaptation .

P3DM applications have been documented for countries as diverse as Australia, Brazil, Bhutan, Cambodia, Cameroon, Canada, Chad, Colombia, DRC, East Timor, Ecuador, Ethiopia, Fiji, France, Gabon, Ghana, Grenada, India, Lao, Guyana, Indonesia, Italy, Kenya, Malaysia, Morocco, Nepal, Namibia, Nicaragua, Papua New Guinea, Philippines, Saint Vincent and the Grenadines, Samoa, Solomon Islands, South Africa, Sri Lanka, Suriname, Tanzania, Thailand, Trinidad and Tobago, Uganda, and Vanuatu and Vietnam as shown on this map. In addition, there are ‘hundreds of non-documented cases where technology-intermediaries (mainly NGOs) support Community-based Organisations or Indigenous Peoples in using Geographic Information Technology and Systems (GIS) to meet their spatial planning needs and/or achieve some leverage in their dealings with state bureaucracy’.  An indicator of the power of mapping has been its restriction through the Malaysian 2001 Land Surveyors Law, passed after a community map in Sarawak had been instrumental in the legal victory of an Iban village against a tree plantation corporation.

PGIS has now become a widespread form of ‘counter mapping’ enabling local people to make their own maps and models, and using these for their own research, analysis, assertion of rights and resolution of conflicts over land, and often reversing power relations with government organizations, politicians and corporations.  The power of participatory mapping is also being amplified by the opportunities offered by the Internet (Web 2.0 and Social Media). Nowadays mapping is usually combined with video production and use of social media to spread the information and call for action which is particularly relevant in advocacy work. PGIS  practice touches on many sensitive issues and is governed by a code of conduct available in 12 languages.

This piece draws heavily on the work of Giacomo Rambaldi and others.  It particularly references the following articles and publications:

Tell us about your experience of using this method